The is just a little “note” on how to install NodeJS on the RaspberryPi, as I was searching for the best way to do it my self several time, I decided to put this up for you guys (and me 😉 ) here to find it more easily..

First ssh into your Pi, then follow the procedure: 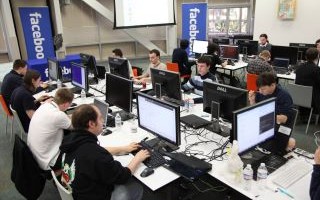 Alphabet Soup was by far the easiest problem in the qualifiers. I am not talking implementation but about understanding the problem. In some cases the “problem designers” did a good job in confusing me for at least an hour by their style in description. In alphabet soup’s case the problem was formulated as follows:

Alfredo Spaghetti really likes soup, especially when it contains alphabet pasta. Every day he constructs a sentence from letters, places the letters into a bowl of broth and enjoys delicious alphabet soup.

Today, after constructing the sentence, Alfredo remembered that the Facebook Hacker Cup starts today! Thus, he decided to construct the phrase “HACKERCUP”. As he already added the letters to the broth, he is stuck with the letters he originally selected. Help Alfredo determine how many times he can place the word “HACKERCUP” side-by-side using the letters in his soup.

The first line of the input file contains a single integer T: the number of test cases. T lines follow, each representing a single test case with a sequence of upper-case letters and spaces: the original sentence Alfredo constructed.

Output T lines, one for each test case. For each case, output “Case #t: n”, where t is the test case number (starting from 1) and n is the number of times the word “HACKERCUP” can be placed side-by-side using the letters from the sentence.

To solve it, simply iterate through the characters in the string, counting how frequently each of them occurs.

END_OF_DOCUMENT_TOKEN_TO_BE_REPLACED 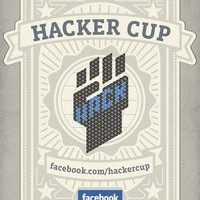 Hackers around the world, here are some good news

Facebook is starting its second (now annual) Facebook Hacker Cup. Get your coke, beer or even glas of redwine next to you, arrange some brain-food and get in a relaxed postion. There will be some code to be written in the next weeks. That’s a challenge all AI-Class Students shall be interested in.

If you are willing to submit your solutions to different hacking problems, you may qualify for the first of three online rounds. The competition commences with a 72-hour Qualification Round on January 20, 2012 at 4:00 PM PT and ends on January 23, 2012 at 4:00 PM PT. You will be presented with three problems and if you correctly solves at least one problem, you will advance to Online Round 1. All online Rounds will be occuring in January 2012 with world finals held at Facebook’s headquarters in California, registration started January 4, 2012.

Facebook will pay to fly and accommodate the top 25 hackers from the third online round out to their californian campus and there is more to win:

AI-Class was an exciting experience. So many people were supporting the professors Sebastian Thrun and Peter Norvig with their work. For most of us watching all the lectures, doing the homeworks and taking midterm and final exams was quite a lot besides regular jobs and other spare time projects. I for my self built a house, built 2 smaller websites and went to my full time job doing some overtime. Besides that I still wanted to have some time with my family. Let’s just say a bunch of things besides learning

All the people compiling additional resources helped me a lot, so by listing them below I want to say Thanks !

For all of you interested in education, Stanford’s new online courses maybe worth a look. I like the entrepreneur classes and I will try to attend as many courses as possible. How  about you?

Look at this small robot solving a highe maze in less than 4 sec after exploring it before.

I am most impressed by the plattform this guy is using to map the maze,
run an optimizer and kind of shooting through the maze with its solution afterwards.

Where can I find details on the implementations and hardware used?

That is pretty impressive isn’t it?